Former United States President Donald Trump dismissed a fraud lawsuit against him and his family as “another witch hunt” and claims the black New York Attorney General is a racist.

The 76 year old former US president and three of his children, Donald Jr, Ivanka and Eric, were hit by the lawsuit after an investigation into the Trump Organisation alleged they lied by billions of dollars in order to pay less tax and get loans. The lawsuit is the culmination of a three-year investigation by prosecutors who allege the Trump Organization committed a number of fraudulent acts between 2011 to 2021.

Prosecutors put together a 222-page document which alleges that Trump and three of his children lied about the value of his properties, including hotels and golf courses, so they could secure better loans and lower tax rates.

The Trump family is also accused of making more than 200 false valuations on financial statements which enriched the Trump household to the tune of at least US$250m and the US tax office wants that money back.

New York Attorney General Letitia James is leading the lawsuit and has referred the alleged criminal wrongdoing to federal prosecutors and to the Internal Revenue Service.

“With the help of his children and senior executives at the Trump Organization, Donald Trump falsely inflated his net worth by billions of dollars to unjustly enrich himself and cheat the system.”

James stated that a number of Trump’s properties have been wrongly valued, including his US$327 million apartment in Trump Tower.

“No apartment in New York City has ever sold for close to that amount. White-collar financial crime is not a victimless crime.

“When the well-connected break the law to take in more money than they are entitled to, it reduces resources available to working people, to regular people, to small businesses and to all taxpayers.” 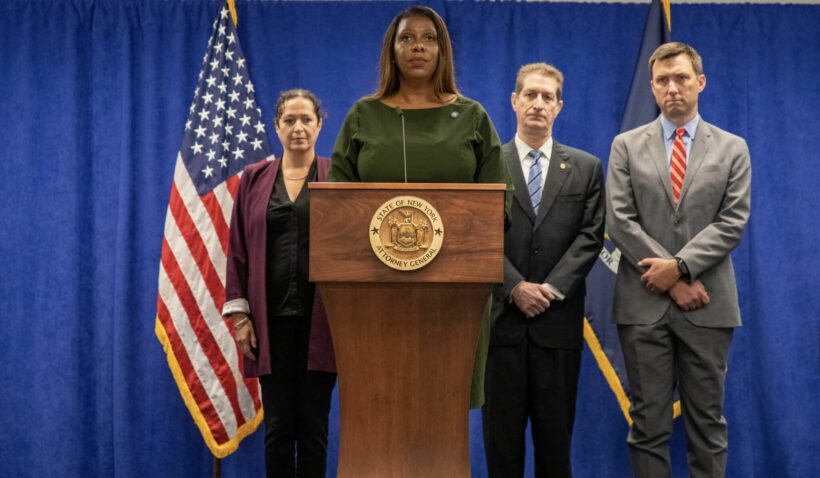 The attorney general recommends the court bans Trump and his children from serving as directors in any New York business or engaging in any real estate business for five years.

“Another witch hunt by a racist Attorney General Letitia James, who failed in her run for Governor, getting almost zero support from the public.”

Trump and James have history.

The Trump family accused James of pursuing a political vendetta in the past after James said Trump was an “illegitimate president.”

Donald Trump Jr claims James is “weaponising her office to go after her political opponents.”

Last month Trump refused to answer questions in connection with the investigation at the attorney general’s office. The former president just repeatedly invoked his Fifth Amendment right to not self-incriminate, and only confirmed his name.

In an out of court testimony Eric Trump did the same more than 500 times.

It could take a year before the lawsuit goes to trial which would hinder Trump’s ability to conduct any business in New York or run for presidential office again. He is still a popular figure in the Republican Party and has hinted he will have another go in 2024.

The former president is also under investigation by the FBI.

The FBI searched his home in Mar-a-Lago on August 8 as part of an investigation into his handling of classified records. This is on top of being investigated for trying to overturn the 2020 presidential election.

Trump denied any wrongdoing in those investigations.

One member of Rabbi David Wolpe’s diverse congregation left because Wolpe would not preach sermons criticizing Donald Trump. Scores of others left over resentment with the synagogue’s rules for combating COVID-19. But Wolpe remains steadfast in his resolve to avoid politics when he preaches at Sinai Temple in Los Angeles....

iStock. Voter booths await the anticipated record turnout in the 2022 midterm elections, as enthusiasm runs high among both Democrats and Republicans, with a close battle for control of Congress. A majority of Americans in a new poll support the idea of making it harder for politicians to override general...

You Don’t Have To Read Our Book. Just Buy Six Copies Of It!

Sharaf Maksumov; Shutterstock; Lauren Justice / Bloomberg / Getty; Leigh Vogel / Getty; The AtlanticSeptember 28, 2022, 10:42 AM ETThe men who summarized the news at the bullet-point-loving startup Axios—Mike Allen, Roy Schwartz, and Jim VandeHei—may now be driving it. They may have tried to tamper with their books’ position...

Today, President Biden will deliver an address at the first White House conference on hunger since 1969, when President Richard M. Nixon pulled together a similar gathering. Administration officials say they have secured $8 billion in public- and private-sector commitments toward helping provide more food and better nutrition by 2030....