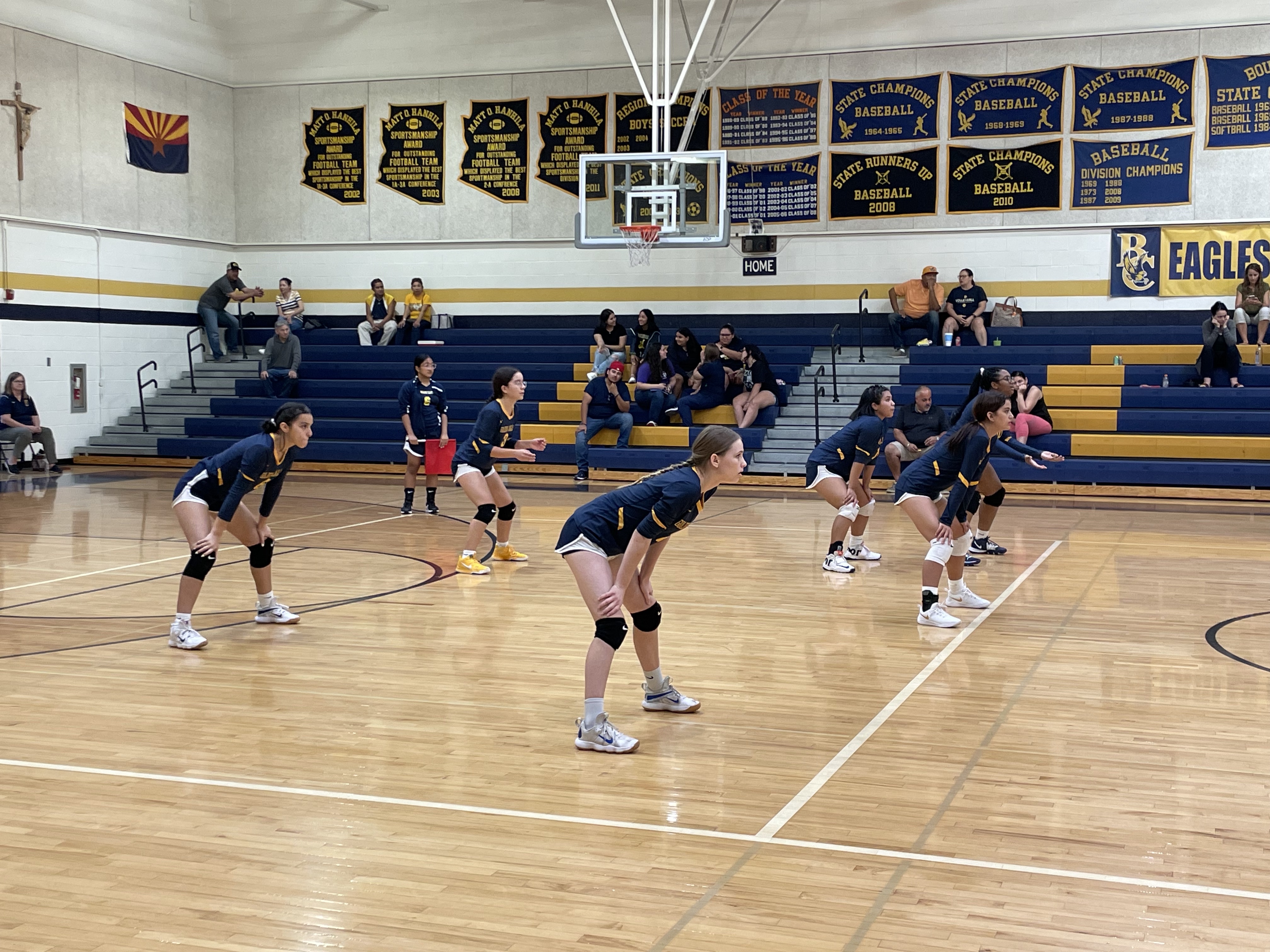 The Bourgade Catholic volleyball team prepare to return a serve during a match against Camp Verde on Thursday. (Janaé Bradford photo/AZPreps365)

“These girls have really great chemistry.” Camp Verde coach Britney Armstrong said. “We’ve been fortunate because they’ve been playing together for the last three years with club and school. They really love each other and tonight it was evident.”

The Cowboys finished that first set with a 6-0 run. Warren continued to dominate with four aces to seal the win.

The energy translated immediately into the second set when Warren kicked it off with five consecutive aces in another 6-0 run.

Bourgade fought hard to close in the lead in a quick third set holding three runs to four points each. Both teams made serving and attack errors keeping the score close.

It was Warren who shifted the energy again in the third set with a kill and two aces consecutively to make the score 16-8. The Cowboys maximized that effort with an 8-0 run to finish the sweep. Senior libero Jaydyn Rayburn led this stretch with five consecutive aces, all to the left back zone.

“Even though we might be down and have a lot of negative energy on the court, we have to keep going either way,” sophomore Emily Bonilla said. “If we give up, that’s a loss for us, but we are still representing our school, team and coach.”

“We need to have a clear mindset,” Naki-Bajet said. “We need to bring some tenacity. We also need to just play and have fun. I think a lot of these girls think about the errors so much that they forget that volleyball is a sport that they love. They have to have fun while doing it.”

The Golden Bears must rest for the Epic Tourneys Chandler Prep Volleyball Invite Friday and Saturday at the Sun Devil Fitness Complex in Tempe. The Cowboys will host the Wickenburg Wranglers on Tuesday at 6 p.m.

Police Looking For Man Accused Of Stalking Woman, Touching Himself At Her Chandler Apartment

CHANDLER, AZ (3TV/CBS 5) -- The Chandler Police Department is asking the public for help identifying a man accused of stalking a woman and doing sexual acts outside her apartment several times this year. Police say the man was captured on surveillance video walking up to a woman’s apartment near...

For many years, Chaparral’s football program has been the face of north Scottsdale high school football, with Saguaro dominating the south. Notre Dame Prep, a conference below the Firebirds, has had its fair share of success, too, making it to back-to-back 5A Conference title games in 2017-18. Chaparral has played in the...